The Book of Enoch

The Book of Enoch, interesting and unknown book to expand knowledge.The Book of Enoch is an ancient Jewish religious work, attributed by tradition to Enoch, Noah’s great-grandfather, although modern scholars estimate the oldest sections (so far in the Book of Watchers) to date from 300 BC, and the last part (Book of Parables), probably at the end of the first century BC.”I have given you the scriptures, they will believe and rejoice in them, all the righteous will rejoice to learn from them all the ways of righteousness.” (1 Enoch 104: 13)The first sections of the book were composed in the third century BC. The authors relied in part on the Pentateuch and expanded the sections on Genesis, Numbers and Deuteronomy. For example, 1 Enoch 1: 9 (the quotation in the epistle of Jude 1: 14-15) is a Midrash of Deuteronomy 33: 2.The Book of Enoch (abbreviated 1 enoch) is an intertestamental book, which is part of the canon of the Bible of the Coptic Church but is not accepted as canonical by the other Christian churches. The only integrated versions of this book that they conserve are in themselves, liturgical language of the Ethiopian Church, but with many variants in Greek, Syriac, Armenian, Arabic and Latin and a fragment in Coptic. In addition, several fragments have been found in Aramaic and one in Hebrew (4Q317), in Qumran. The tradition attributed its authorship to Enoch (also transcribed as Enoch or Enoch), great-grandfather of Noah.The book was published in the first century of our era and consists of several parts written in the third century BC. C. and I d.C.The first part of the Book of Enoch describes the fall of the Watchers, the angels who fathered the Nephilim. The remainder of the book describes Enoch’s visits to heaven in the form of travels, visions and dreams, and his revelations.The book consists of five quite distinct major sections:The Book of the Watchers (1 Enoch 1–36)The Book of Parables of Enoch (1 Enoch 37–71) (also called the Similitudes of Enoch)The Astronomical Book (1 Enoch 72–82) (also called the Book of the Heavenly Luminaries or Book of Luminaries)The Book of Dream Visions (1 Enoch 83–90) (also called the Book of Dreams)The Epistle of Enoch (1 Enoch 91–108)Most scholars believe that these five sections were originally independent works (with different dates of composition), themselves a product of much editorial arrangement, and were only later redacted into what we now call 1 Enoch.The early Christians had great appreciation for the Book of Enoch, as attested by the canonical epistles of Judas (6 and 14-16) and 2 Peter (2: 4), as well as the noncanonical epistles of Barnabas and the writings of Justin Martyr ( 100-165), Athenagoras (170); Tatiano (110-172); Irenaeus, Bishop of Lyon (115-185); Clement of Alexandria (150-220); Tertullian (160-230); Lactantio (260-325) and also those of Metodio de Filipo, Minucio Félix, Comodino and Prisciliano (m 385).The Book of Enoch is about an apocalyptic book pertaining to the Jewish apocalypticUndoubtedly, the Book of Enoch was widely known and appreciated in the Jewish world and was later inherited by the early Christians, who were largely responsible for preserving it in other languages. The Book of Enoch is classified as pseudoepigraphic because its content is attributed to this legendary descendant of Adam, although the content and the problems he narrates are clearly of later origin.You will have access to Hebrew Bible, Audio Book with words and a PDF version too.In our “More Biblical Apps” section, Biblia de Estudios , Temas Biblicos para predicar , Parabolas de Jesús , Estudios Biblicos , Santa Biblia Reina Valera , Sermones Predicas Adventistas , Devocionales para la Mujer , Estudios Bíblicos para Mujeres y jóvenes cristianos and more applications of Theology to feed your soul and care for your FAITH.The Book of Enoch contains advertising to cover the programming expenses.
The book of Enoch (Book of Henoc) ancient religious Jewish work attributed to Enoch 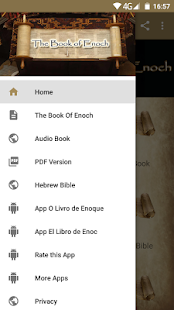 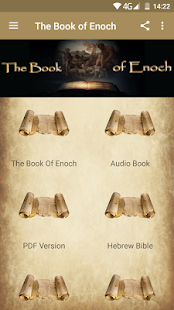